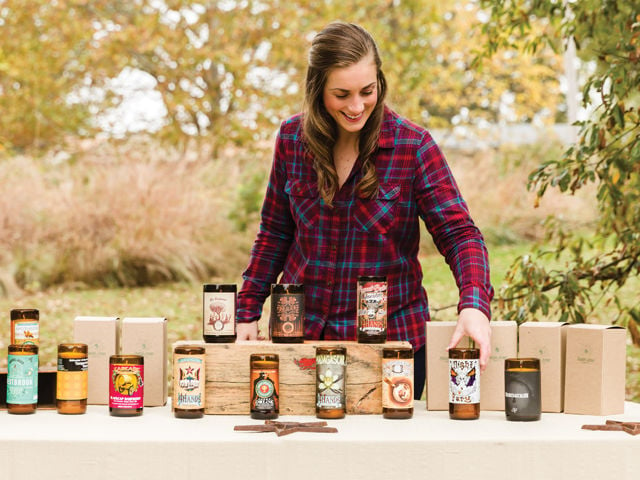 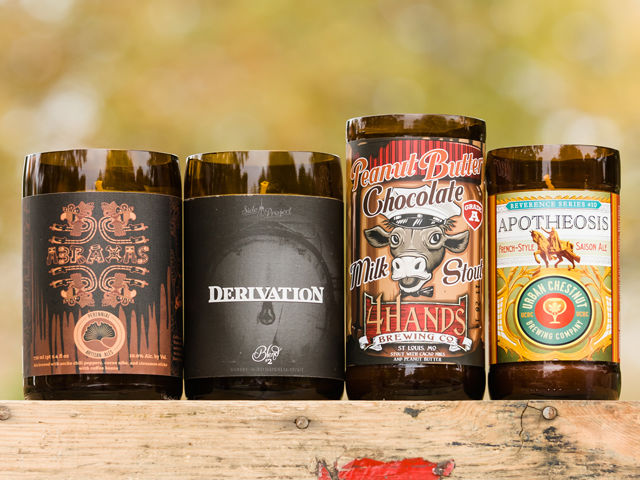 Anderson can create custom candles based on your favorite craft beer.

Anderson can create custom candles based on your favorite craft beer.

Enjoying beer is more than just tasting it – it’s also the yeasty aroma of a good saison or the scents of chocolate and bourbon from a barrel-aged stout. Twinkle Brews Candle Co. founder Mollie Anderson turned that aroma into a business: Her candles are made from hand-cut recycled beer bottles – labels intact – filled with 100-percent soy wax that’s fragranced with the notes of the beer once found in the bottles. She focuses on local and regional brews, including those from 4 Hands Brewing Co., Perennial Artisan Ales, 2nd Shift Brewing, Boulevard Brewing Co. and Side Project Brewing, as well as national offerings. Twinkle Brews candles are available in small, medium and large sizes at St. Louis-area retailers including Craft Beer Cellar; The Novel Neighbor in Webster Groves, Missouri; and Philomena + Ruth in Waterloo, Illinois, as well as events and festivals including Urban Chestnut Brewing Co.’s winter markets on Dec. 3, 10 and 17.

What inspired Twinkle Brews? Two years ago, I was sitting at home with my husband and drinking craft beers. The bottle labels were so cool, and I loved the aroma of the beers, but it made me so sad that we’d have to throw the bottles away after we were done. I was trying to figure out how to save the bottles, which were starting to fill up the house, and my first thought was to make drinking glasses. But washing the glasses made it hard to save the labels. I remembered I loved the aroma of the beer that got me thinking in the first place – it was an apple-brandy beer – and had a lightbulb moment to make the bottles hold a candle the scent of the beer.

How do you develop the candle’s scent? Of course, the first task is drinking the beer – such a hard thing to do. But I don’t use the actual beer to make it. Let’s say I have a bourbon barrel-aged stout: I’d take some chocolate fragrance and some bourbon fragrance because those are the strongest notes I got from drinking the beer, and I’d combine them and mix with the wax. Most of the aromas I have are chocolate for stouts, tropical and/or citrusy for IPAs, the bready-lemon-funky scent for saisons, and bourbon and whiskey for boozy [beers]. I also make custom candles where people will give me the bottle of their favorite beer, and then I pull from a website that’s essentially a dictionary for beers, where people leave tasting and smelling notes.

Do all beer styles translate into candles? Most beers do – stouts, fruity beers, lambics, etc. IPAs are great, too. Saisons are a little tricky because they have a malty, bready smell that’s harder to replicate in a candle, but I’ve worked it out pretty well at this point.

Do you have any favorites? Local beers always sell great. The seasonal beers go fast, too; the pumpkin beers were a hit in the fall, and then this winter, there are some gingerbread stouts that should be really popular, and I have some bottles of Christmas Bomb! by Prairie Artisan Ales. The 4 Hands Tiki Chocolate Milk Stout is probably my favorite candle to make; it’s like a fresh Almond Joy.

How does the upcycle program with Craft Beer Cellar work? If Craft Beer Cellar opens a bottle or does a bottle share in the store, staff save them for me to pick up. It’s a perfect collaboration because I need bottles and they need to get rid of bottles. It keeps the bottles out of the trash or recycling. The good thing about my candles, too, is that you can refill them – my large candles run for $25, but they burn for 170 hours and you can get them refilled for $5. I wanted to have this option because I wanted people to be able to continually enjoy the candle that they bought.

Bethany Christo is Feast's special projects editor who enjoys barbecue, grammar, good reads, thrifting, attempting humor and rapping by herself in the car, all to the detriment of her social life. You'll find her near the desserts.

Drink to your health with St. Louis-based Avocado Leaf Tea

Steve St. Pierre wants you to have a cow at his urban farm store and café in St. Louis