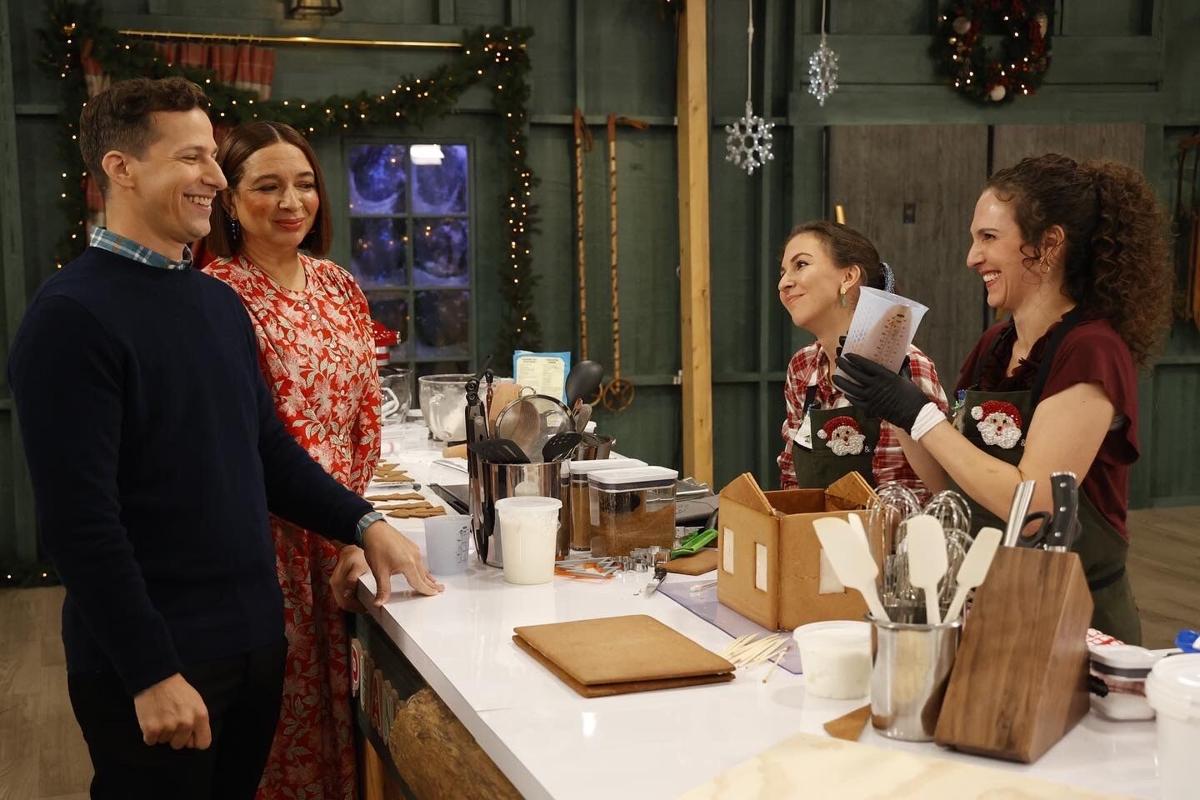 Stephanie Moikeha and Jessica Washburn chat with Andy Samberg and Maya Rudolph on Baking It. 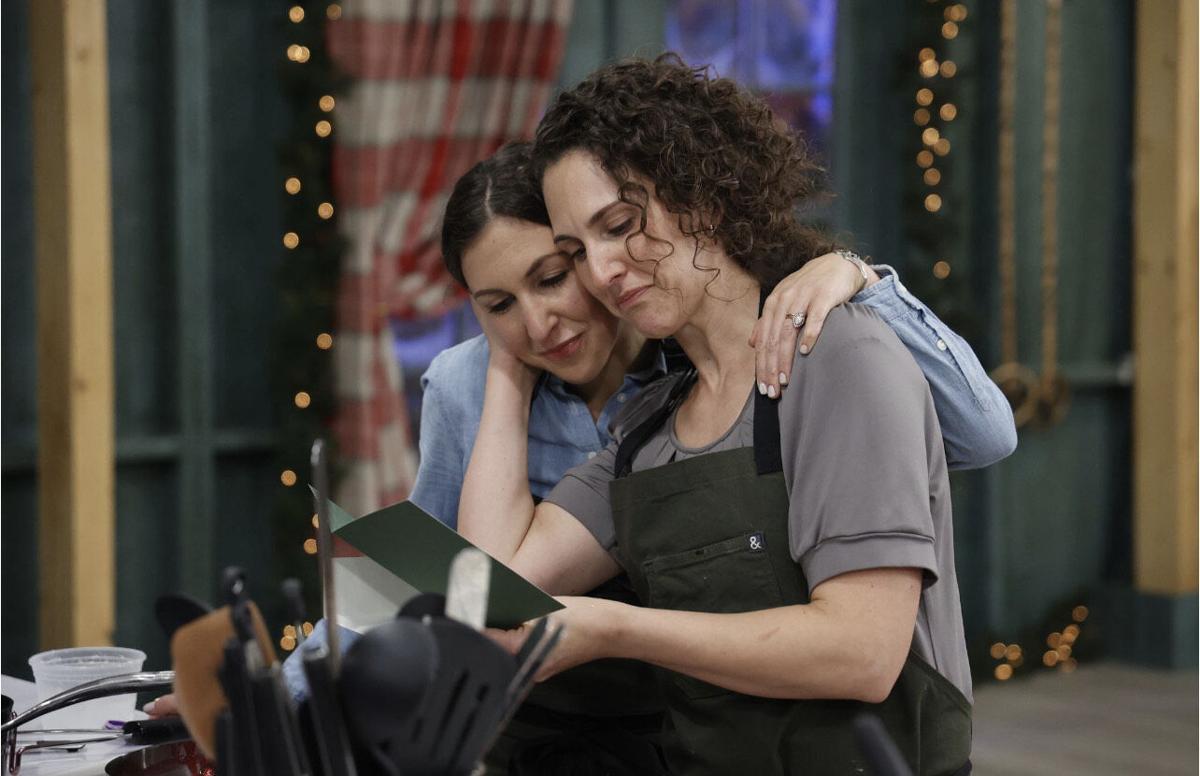 Stephanie Moikeha and Jessica Washburn during a challenge on Baking It.

Jessica Washburn was sure it was over.

The last challenge of the first episode of “Baking It” – a food competition series on Peacock hosted by Maya Rudolph and Andy Samberg – had just wrapped filming, but Washburn turned to Stephanie Moikeha, her sister and partner, and said, “I’m so sorry. We’re going home.”

Things had gotten out of hand quickly. The studio’s kitchen was vastly different than Washburn’s home kitchen in Blue Springs, Missouri; the temperature on set was 5 degrees higher than she expected; and midway through baking snowman macarons decorated with royal icing – which the sisters had never used before – Washburn realized her oven was set to the convection setting. The snowmen had to finish baking with the oven door halfway open.

“I thought I blew it, and I just did not think we were going to make it through the first episode,” Washburn says.

As it turned out, the panel of grandmas who served as judges for the show only had wonderful things to say about the macarons. Soon enough, after what Washburn thought was a dreadful start, she and her sister won the competition and took home $50,000 in prize money.

It’s been a whirlwind for Washburn, who, with her mother, opened Bliss Chocolatier in Blue Springs in December 2020. Just a few months later, a casting agent for “Baking It” contacted her about auditioning for the show. Washburn wasn’t initially interested, until she was encouraged to watch “Making It” – the predecessor to “Baking It,” which was created by the same executive production team.

“So I did, and the show was so cute and wholesome and uplifting,” she says. “Plus, there was the idea that they wanted a main baker and a helper, and I had thought about inviting my sister to audition with me, and the thought of being able to spend that time with her and the general vibe of the show convinced me to go through the audition process.”

The business is owned by mother-daughter duo Jessica Washburn and Pat Jarstad.

The sisters went through three rounds of auditions in mid-2021, only to be cut. They got another call in August – just one week before contestants were due on set – to ask if they were still interested. Washburn said they were, but added the caveat that she wouldn’t have any time to prepare; since she would need to take off more than two weeks, she had to stock her store with enough product and make sure her six children were ready for school, which would begin when she was gone.

Ultimately, they decided they were in, but it wasn’t until 8:30pm on the night before the sisters left for the NBC Universal Soundstage in Los Angeles that they learned they were officially cast.

“It was just emotionally draining,” Washburn says. “It was scary. I’m usually an over-preparer and researcher. I had to just be like, either I have the skillset or I don’t.”

The show, which featured eight teams of two competing against each other, filmed for eight days in mid-August. Despite the long pre-production process, Washburn found the experience to be well worth the effort, lauding the production crew and other bakers on the show.

“I was really surprised and blown away by the whole behind-the-scenes experience of seeing how a TV show gets put together, and the sheer number of people involved who are so talented and good at what they do,” she says. “And they made us feel like we were an important part of that team. That was such a pleasant surprise to me. I was blown away with the other bakers.”

The sisters also had the added bonus of getting to know Rudolph and Samberg, whom Washburn praised as being quite authentic.

“They’re very genuine, kind and charismatic,” she says. “They were just likable, and you wanted them to like you because you liked them so much. You just were drawn to them. They were just very supportive and very sweet.”

As for what she and her sister plan to do with the prize money, it’s no surprise that family was the first priority. Jessica and Stephanie plan to take both their families on a vacation soon, likely to a beach.

The entire first season of “Baking It” is now available to stream online via Peacock.

Thanks to new owners, the 90-year legacy of Kansas City's Tenderloin Grill will continue

Bought by Minksy's Pizza Group, a few improvements have been made, but the classic menu won't change.

Yozelyn Jiménez is a bartender at Drastic Measures, and she also owns her own cottage baking business.

Cuisines ranging from American to West African to Taiwanese are included in this 10-day dining event.

The café inside of Family Tree Nursery offers a green space to enjoy your coffee no matter the season.

The new location is expected to open as early as May 2022.

A Kansas City culinary veteran is now selling his signature Palestinian food at his own shop, Baba's Pantry

Baba’s Pantry opened last summer on 63rd Street near Troost Avenue with a deli case full of grab-and-go items and a menu of Middle Eastern dishes.

Located on the sixteenth floor, you can experience the Country Club Plaza from above while enjoying a drink.

While Kansas City saw some new spots, it also had to say goodbye to some old favorites.

Stephanie Moikeha and Jessica Washburn chat with Andy Samberg and Maya Rudolph on Baking It.

Stephanie Moikeha and Jessica Washburn during a challenge on Baking It.