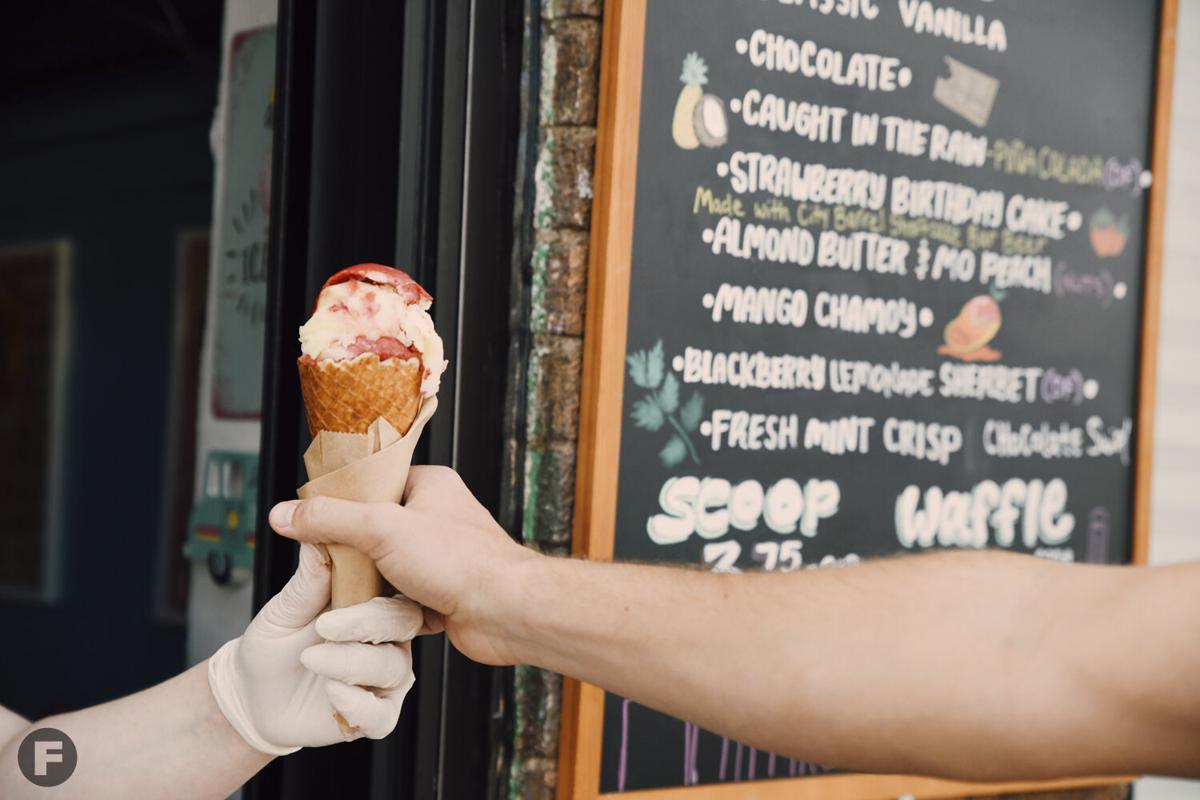 High Hopes is run out of a walk-up window on Troost Avenue. 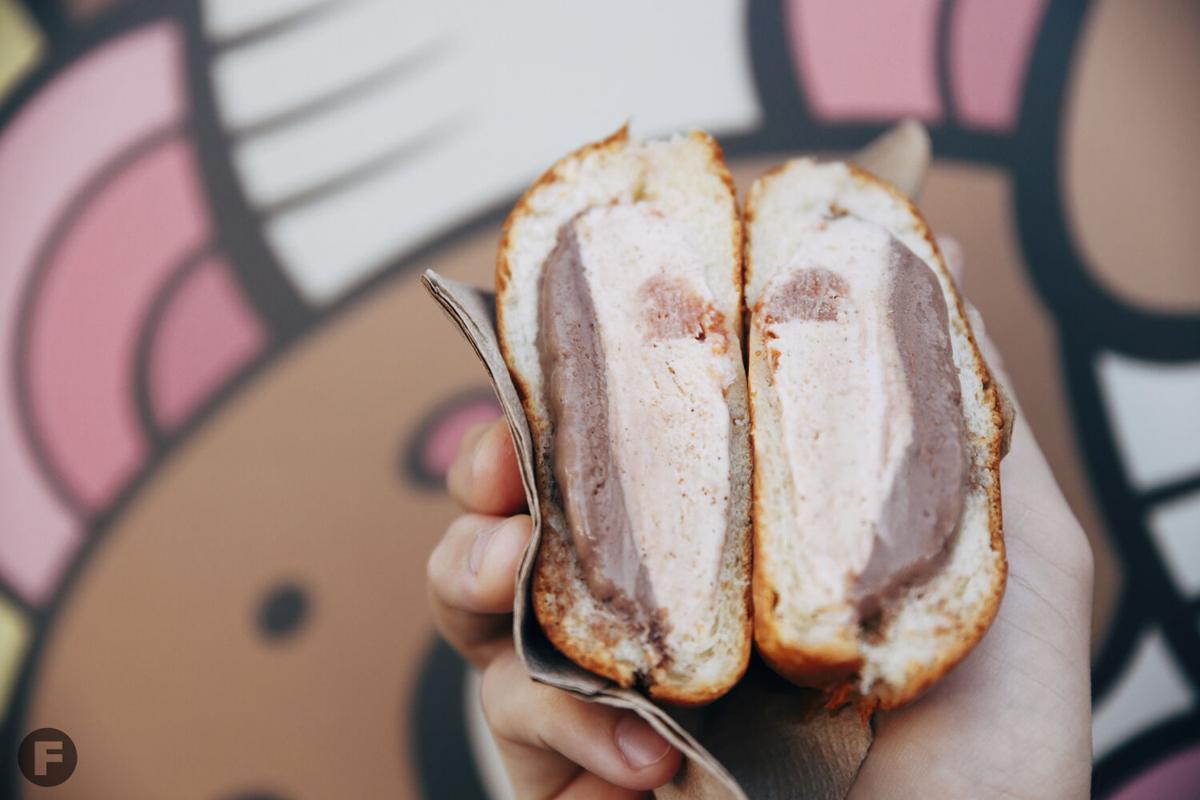 The Saturn Sammie is a take on the croque glacé ice cream sandwich that Howard first experienced at France's Walt Disney World Resort. 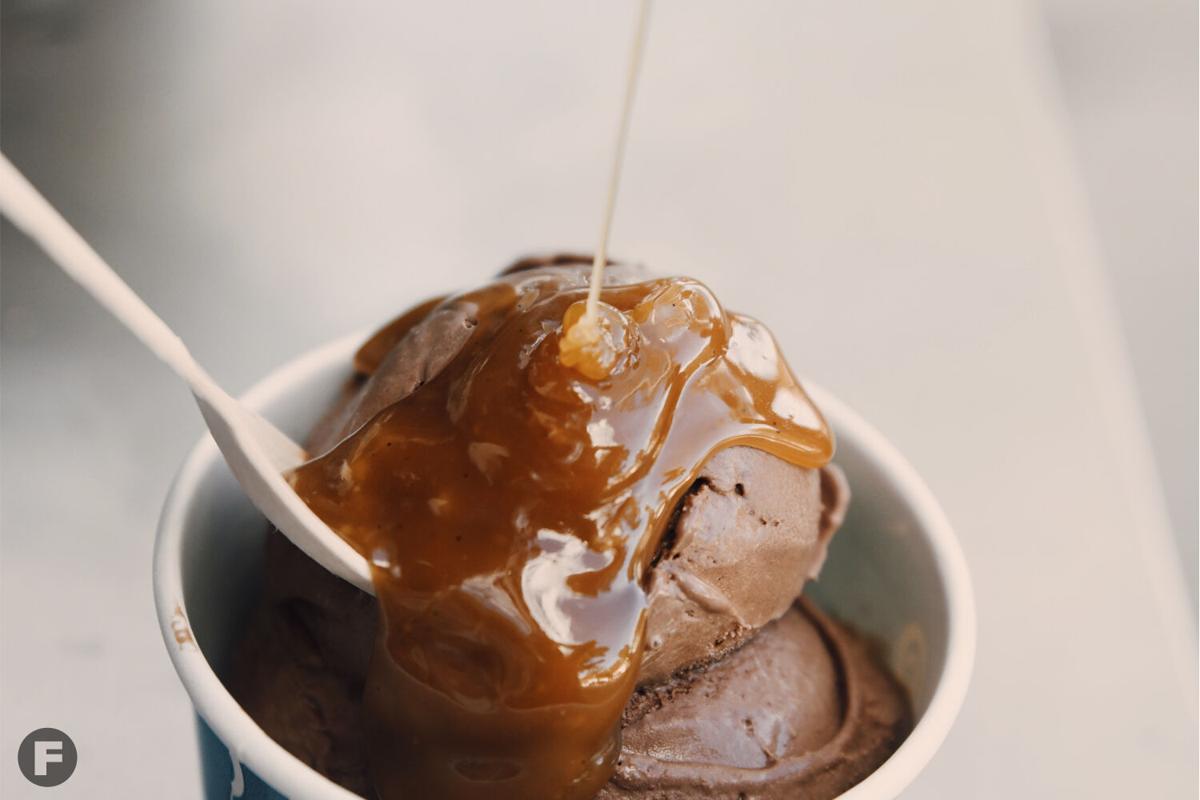 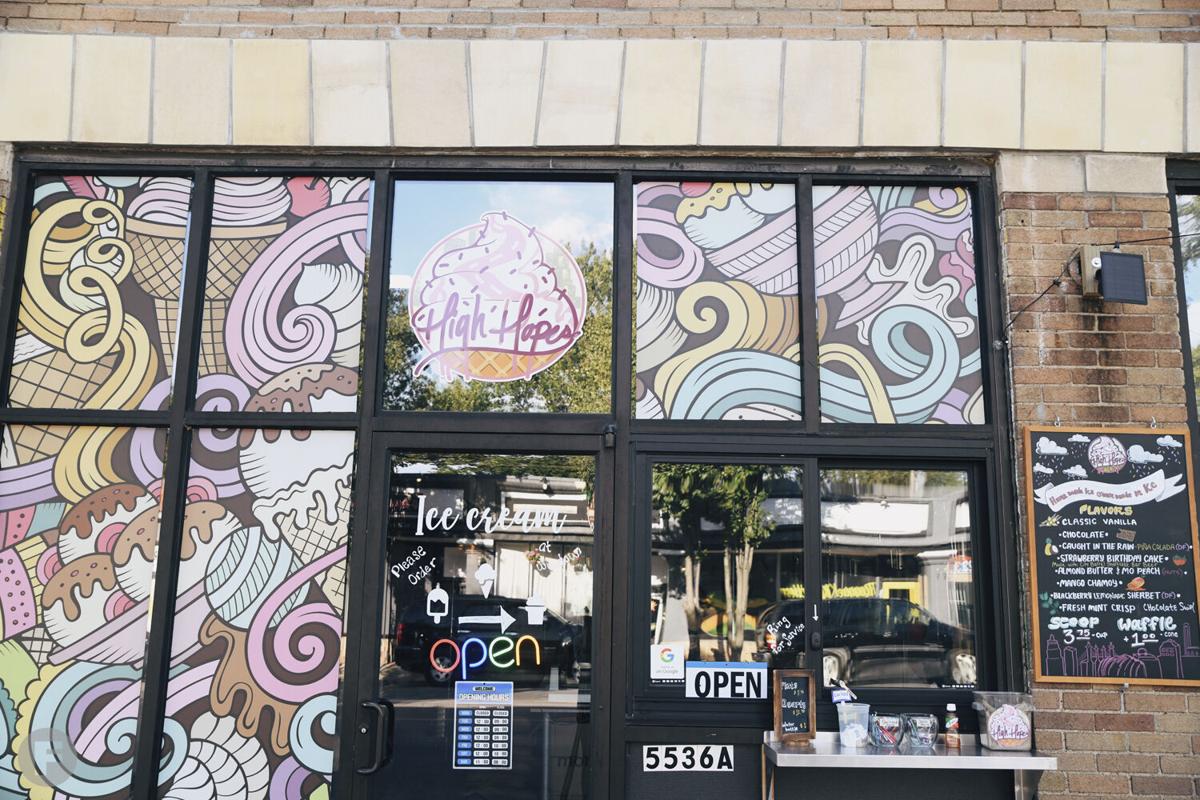 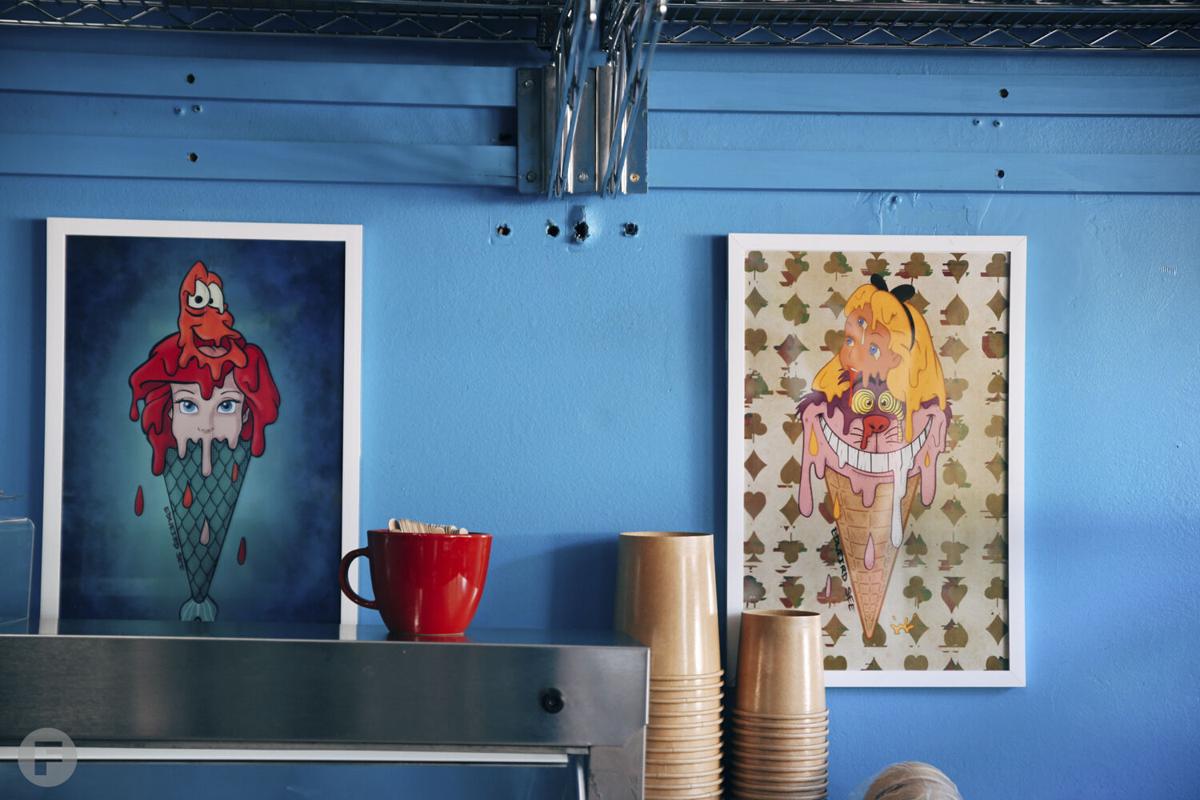 You'll see plenty of bright colors if you catch a peek of the shop's interior.

Working in restaurant kitchens for more than a decade – first on the savory side, then the sweet – provided chef Jamie Howard with an inspired framework for how sweet and savory flavors can play well together.

After spending time cooking at both The Rieger and Stock Hill, she landed at Betty Rae’s developing ice cream flavors and opening their second location in the River Market. Howard thought she left ice cream behind when she accepted a pastry job at Blackhole Bakery, but that was before she hatched a pandemic-proof business plan to open her own ice cream shop right across the street from the popular bakery.

High Hopes Ice Cream is located in the former Happy Apple Café space on Troost Avenue. After watching the empty space from a distance, Howard finally decided to go and have a look. She was initially concerned about how little interior space there was, but she hatched a better plan: operating her business out of a walk-up window.

“I saw the walk-in traffic, first-hand, at Blackhole, [and] I knew that this part of Troost pulls people from the neighborhoods around it,” Howard says. “I was initially worried that this space would be too small for indoor seating, which I think most people expect when they think of going out for ice cream, but by having a walk-up window, we solved that problem, while hopefully keeping everyone as safe as possible.”

As the name might infer, High Hopes was originally planned as a cannabis-infused ice cream business. But just as medical marijuana was about to pass in the state of Missouri, frozen desserts were excluded from the list of potential products, dashing her hopes for creating infused frozen treats. She had already picked the name, and her friend, artist Evan Jackson, had already created the logo for the shop when he unexpectedly passed away. That made her further determined to open the shop regardless, using his logo as a tribute.

“High Hopes Ice Cream is a reference to a song made famous by Frank Sinatra, and I whistled it a lot when I began collecting ice cream-making equipment and tucking it into corners of my house for the day when I would open my own place,” Howard says. “The cannabis-infused ice cream certainly fit the name, but to me it is now more about doing what you believe is impossible.”

At any given time, Howard offers eight staple handmade ice creams and up to four more seasonal flavors – all made with 14 percent butterfat base, considered super premium for ice cream. A combination of almond butter and Missouri peaches is a play on peanut butter and jelly, and mango-chamoy is the best mix of sweet and heat. There is a blackberry-lemonade sherbet that is dairy-free, and the fresh mint crisp has a cool mint flavor with a swirl of chocolate and crunchy breakfast cereal. A sneak peek of her new fall flavors includes bourbon-butter-pecan, pumpkin latte swirl and a spooky orange sherbet. And it's all available by the scoop, in a scratch-made waffle cone or to take home in pints and quarts.

“I want to source locally," Howard says. "I am not interested in making manufactured ice cream flavors like cotton candy or bubble gum. Seasonal flavors that use as many fresh local ingredients as possible that are also delicious are what I am interested in making."

A popular choice on her new menu is the Saturn Sammie, a take on the croque glacé ice cream sandwich that Howard first experienced at Epcot in France's Walt Disney World Resort. This special treat features a sweet brioche bun from Blackhole that is cut open and filled with an ice cream scoop and sauce of your choice before being placed in a special machine that toasts the outside of the bun while keeping the interior nice and chilly.

And as the traditional ice cream season comes to an end, Howard has several ideas to keep people coming to her window year-round.

“I have a full commercial kitchen built into this space, so I plan to do things that play off hot and cold to take us through the colder months of the year, like creamy milkshakes and malts served with a crispy pile of salty, hot french fries to dip into it,” says Howard. “I also plan to make my own hot chocolate and maybe do churros, too. We will have affogatos and cups of nourishing, made-from-scratch bone broth to help keep people warm this winter.”

Howard has long-term "high hopes" for another concept someday, one that brings together her own talents and those of her partner, bartender Jonathon “Tex” Bush, in a fun, playful dessert bar. She could create desserts showcasing her ice creams and other pastry talents, and he would do cocktails to match.

“We’ve always talked about doing something together," Howard says. "Jonathon also makes these incredible sodas, which I plan to use to make ice cream floats at High Hopes Ice Cream, but at some point, I may try to get a liquor license here so I could sell not only his bottled sodas but also his bottled cocktails."

High Hopes Ice Cream is open Tuesday through Saturday from noon to 9pm.

The best food and drink events in Kansas City this weekend: Oct. 15-17

Sample all things cheesy, try some new beers or learn to make some magical cocktails this weekend.

This husband-and-wife duo has been wanting to open a bakery together for years.

The opening is a step up for the restaurant, which previously had just a stand at the market.

While the two concepts are very different in feel, they blend together seamlessly in one building.

The restaurant's specialties include a short rib beef stroganoff and chicken fingers that are marinated for 48 hours.

After a devastating fire, Big Red Food Truck is serving smash burgers yet again in the Kansas City area

High Hopes is run out of a walk-up window on Troost Avenue.

The Saturn Sammie is a take on the croque glacé ice cream sandwich that Howard first experienced at France's Walt Disney World Resort.

You'll see plenty of bright colors if you catch a peek of the shop's interior.