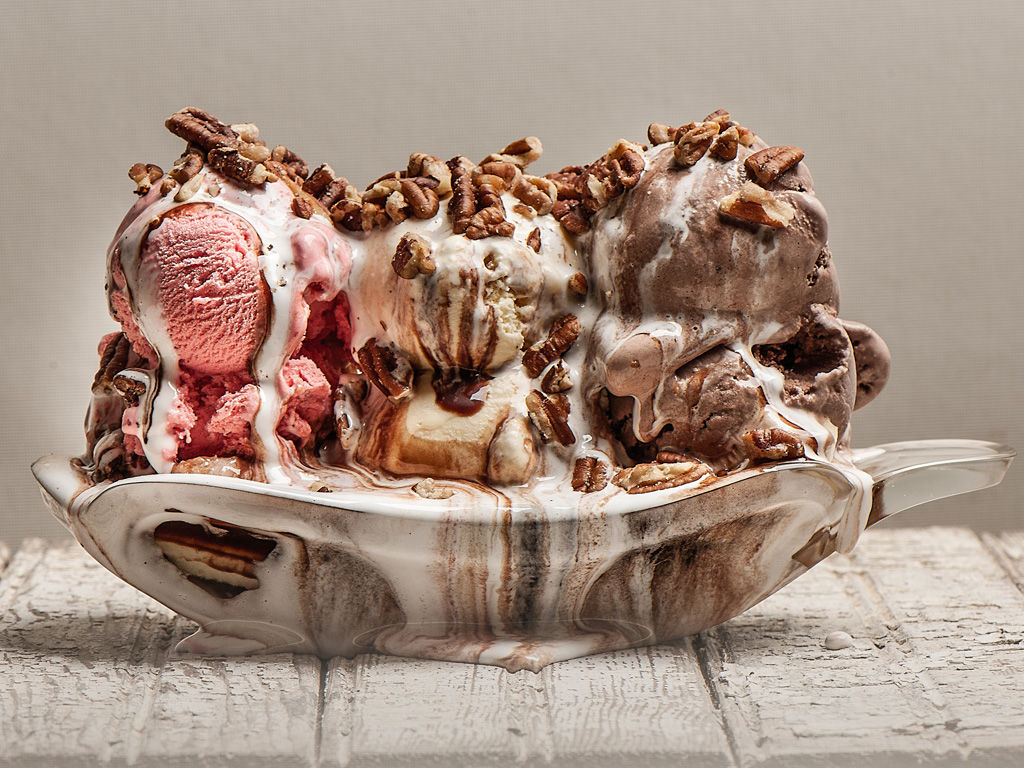 To this day, Central Dairy continues to use the same ingredients and formulas as it has for the past 80 years. 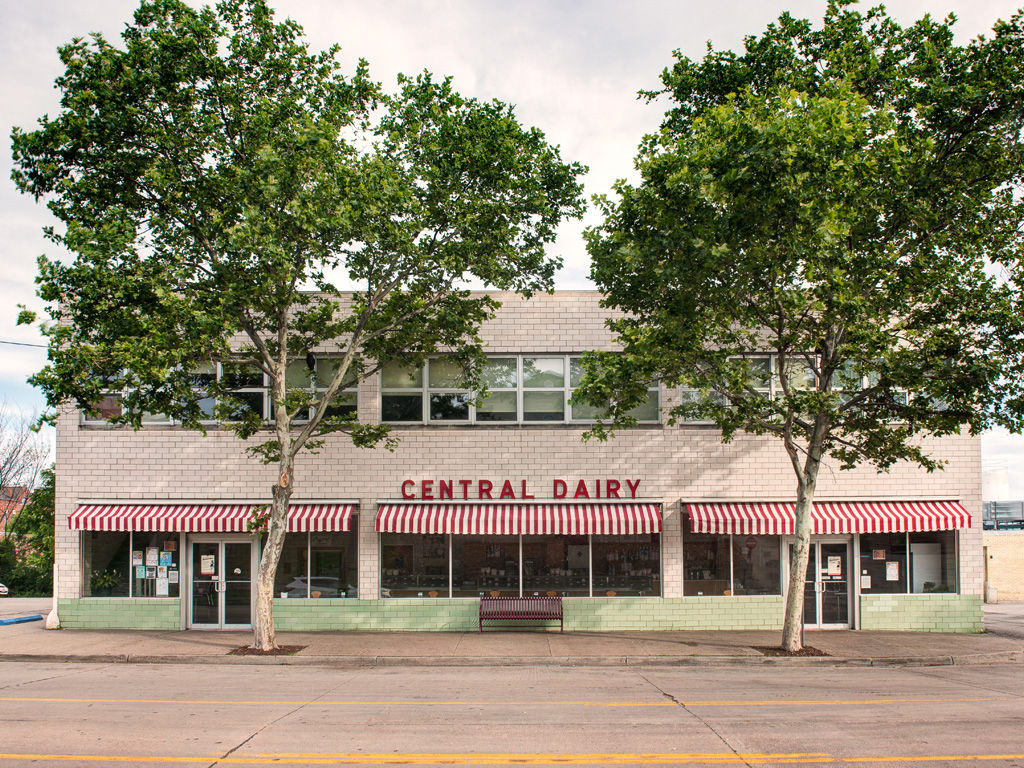 Central Dairy continues to draw visitors from around the country each year. 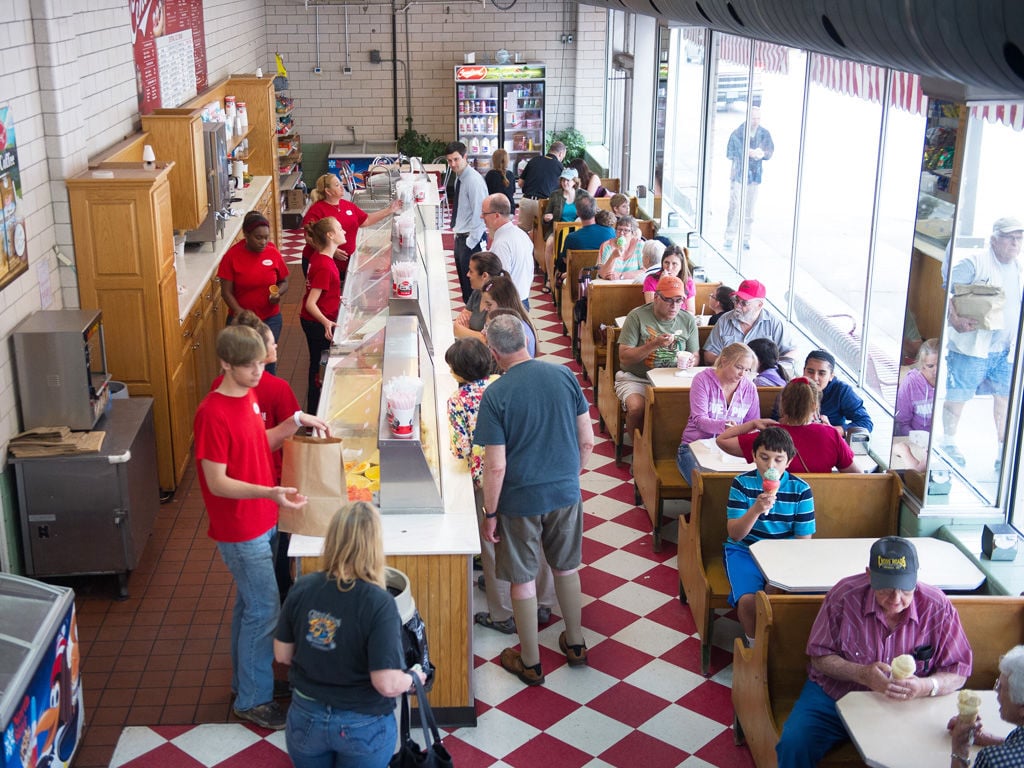 Inside the ice cream parlor, not much has changed during the past 80 years. 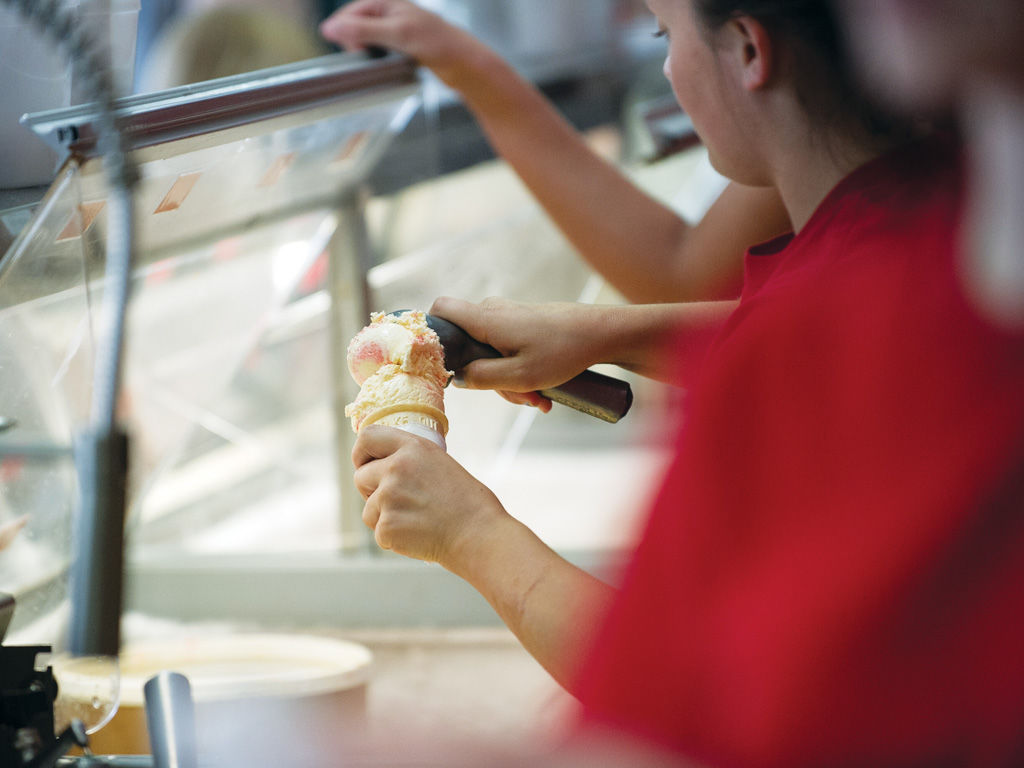 To this day, Central Dairy continues to use the same ingredients and formulas as it has for the past 80 years.

Central Dairy continues to draw visitors from around the country each year.

Inside the ice cream parlor, not much has changed during the past 80 years.

At 1:30pm, yellow school buses roll up like clockwork. For a brief moment, a red-and-white-striped awning peeks out before another school bus pulls up to the curb and blocks it from sight. A line of chattering kids in neon T-shirts already stretches from the front door of Central Dairy down the block and around the corner.

Inside the old-fashioned ice cream parlor, creaky wooden booths are filled with families devouring waffle cones stuffed with Rocky Road, plastic pint containers packed to the brim with black walnut ice cream and banana splits large enough to easily feed four. The line moves quickly and efficiently past the counter and outside through the door at the other end, where tiny hands are already sticky with bright green mint-chocolate chip ice cream.

“Well, this is bus season,” says general manager Chris Hackman with a laugh, surveying the crowds outside the historic dairy in Jefferson City, Missouri.

Each year, Central Dairy braces itself for “bus season” – the weeks from mid-April to the end of May when students from around the state pile into the ice cream parlor during annual field trips to the Missouri State Capitol. These days, the line of bright-eyed kids stretching outside the door has become a familiar sight at the iconic ice cream parlor, which continues to draw visitors from around the country each year.

The original Central Dairy Co. was founded by Dot Sappington and Clyde Shepard in 1920 about a half hour away, in the heart of Columbia, Missouri. Initially, items were produced in Columbia and sold there and in Jefferson City, but in 1932, Sappington sold his share of the Columbia business to his son and moved to Jefferson City to start a new Central Dairy at 610 Madison St. in 1933. The now-famous ice cream parlor was installed in the front of the building, with the production facility in the rear. Although both outposts used the same, now-iconic red-and-white logo and had many other similarities, they operated as separate companies. Phone-book records even indicate a third branch for a “home-owned” Central Dairy in Fulton, Missouri, throughout the 1940s, which might have been started by another Sappington.

Central Dairy was one of the most prominent dairies in the area in the first half of the 20th century, even throughout the Depression. The Columbia facility continued to house Central Dairy’s sales and processing operations until 1959, when the business was sold to the Meadow Gold Dairy Co. Now home to an appliance store, a restaurant and lofts, the Columbia building remains on the National Register of Historic Places. In 1927, Central Dairy moved its dairy operations into the building at 1104 E. Broadway, and the words “Central Dairy” still appear in the terra cotta band above the main entranceway.

In the early 1950s, longtime employees Leo and Tulah Hackman bought the Jefferson City branch of Central Dairy from Sappington. Tulah had started working in the dairy’s office in 1936, with Leo joining shortly after as a route driver. The Hackman family has been involved with the business ever since – Leo and Tulah’s son Gale ran the company for several years before passing it down to his son Chris. Gale says it was rewarding to work with his parents – Tulah even continued working at Central Dairy until a few months before she passed away at age 91.

“Her dedication to her work – and to the company – was an inspiration to me, as well as all the employees,” Gale says. “Many employees started working here straight out of high school and stayed till they retired. When jobs opened up, many times there would be a line of prospective employees out the door and down the block.”

Gale continued to work with his son at Central Dairy until 2010, when he retired, and he says he’s proud of the way Chris has moved the company forward. “When Christopher was in about the fourth grade, he had to write a report on what he wanted to be when he grew up,” Gale says. “He reported that he wanted to work with his dad at Central Dairy and be the president of the company ‘when his dad said he could.’”

Central Dairy was acquired by Prairie Farms Dairy, based in Carlinville, Illinois, in 2007, but Chris stayed on as general manager (a title he also holds for the mid-Missouri division of Prairie Farms). He insists that not much changed after the takeover. “Instead of being a small, regional player, now we’re part of a multibillion-dollar company,” Chris says. “It’s allowed us to expand distribution and add more jobs while still maintaining the same formula and the same process that we’ve always had.”

To this day, Central Dairy continues to use the same ingredients and formulas as it has for the past 80 years. This January, Central Dairy ceased operations on its longtime home-delivery service, but its range of products – milk, ice cream, sherbet, orange juice, Chip ‘n’ Dip, cottage cheese and sour cream – are still available in grocery stores throughout mid-Missouri.

Central Dairy mainly sources from the Dairy Farmers of America cooperative, which supplies the business with fresh milk from local dairy farms within a 60-mile radius of the Jefferson City plant. Milk is Central Dairy’s highest-volume product, and the company produces five varieties: 1 percent, 2 percent, skim, Vitamin D and chocolate. The leftover cream skimmed off of 1 percent, 2 percent and skim milks is used to make ice cream mixes, which are pasteurized the night before production to give the mix a fuller body. The next morning, the ice cream crew will freeze the mix in whatever flavor and size is needed – Central produces everything from a 4-ounce cup up to a 3-gallon tub. The team might run vanilla in the morning or butter-pecan in the afternoon, depending on what flavors are running low.

“We had a meeting with a restaurant owner who requested a new ice cream flavor,” he says. “My dad said, ‘Sure, we can make that!’ When we got back to the car, Dad turned to me and said, ‘We can do that, can’t we?’ And, of course, we did.”

Central Dairy also makes four frozen yogurts (white chocolate-almond, vanilla, strawberry-cheesecake and banana-peach), six sherbets (raspberry, lime, orange, pineapple, lemon and rainbow) and four low-fat ice cream flavors. Despite that wide range of flavors, vanilla is by far the company’s most popular – it accounts for as much as 45 percent of the ice cream Central Dairy produces. Hackman says its popularity is largely due to its versatility: Vanilla is used as the base for sundaes, banana splits and floats at the ice cream parlor.

Inside the parlor, a line of customers snakes past freezer tubs of a few dozen flavors, each listed on a simple, large red menu behind the counter. Central’s ice creams and sherbets are available in a cone, dish, malt, shake, sundae or old-fashioned ice cream soda. A few sundae specials and splits are also on offer, including the banana split, a longtime favorite. It starts with a whole banana sliced down the middle and loaded with three large scoops each of chocolate, vanilla and strawberry ice cream. It’s finished with a drizzle of marshmallow, chocolate sauce and nuts; not for the faint of heart, it comes served in a disposable plastic boat with two full sheets of wax paper underneath to soak up every last drop.

Although still one of the best deals in town, prices have changed a bit over the years; a single-flavor cone will run you $2, compared to a nickel back in the day. Small scoops are served in simple plastic cups and large scoops and sundaes in red-and-white pint containers – Central Dairy hasn’t won fans for being ostentatious.

In fact, inside the parlor itself, not much has changed during the past 80 years. Framed photos of Leo and Tulah Hackman greet diners upon entering the building, and the walls are lined with the building’s original white tile, with a strip of seafoam green tile lining the floor. A few lucky guests can grab a seat at an old-fashioned wooden booth or 1950s diner-style Formica-and-chrome table. A silver air-conditioning duct runs the length of the ceiling (though Chris says several outspoken regulars have politely suggested he paint it red to match Central’s classic cursive logo). That logo, which once graced the company’s delivery cars – and still does for a few – as well as the Columbia facility, can be spotted everywhere from the menu and ice cream cups to the sign hanging over the glass window into Central’s parlor. (In 1971, the dairy scaled up and moved its production facility – originally located in a 6,000-square-foot building connected to the ice cream parlor – across the street.)

Chris has good reason for not changing anything. A few years ago, he replaced the wooden cabinets behind the ice cream counter. Immediately, he was flooded with complaints from longtime customers.

“The doors were actually falling off of the old cabinets, so we needed to replace them,” he says, shaking his head. “[Customers] were like, ‘Well, we like the old ones.’ I try not to change very much because people really don’t like it.”

Tradition has long been the cornerstone of Central Dairy, which still keeps its original – and somewhat unusual – hours. The parlor opens at 8am every day but Sunday (when it opens at 10am), and closes by 6pm each day. Its menu consists of just two savory offerings – a “hot dog sandwich” and Polish sausage sandwich – but it’s not unusual to find the ice cream parlor buzzing early in the morning.

“We’ll have people who will be waiting when we open at 8am because every year they come to get their ice cream before they go to state track,” Chris says. “We have regular customers who come in almost on a daily basis to get fountain sodas, and we have customers who come in for a certain flavor once a week or once a month. It’s a happy place; it’s where you go to enjoy a good product and have fun with friends. It’s somewhere you want to return to over and over.”

Flavors range from classics like brownie sundae and mint chocolate to seasonal options like mulberry and blueberry.

Today's Takeout: Build Your Own Sandwich and Iced Macchiatto from Lakota Coffee Co.