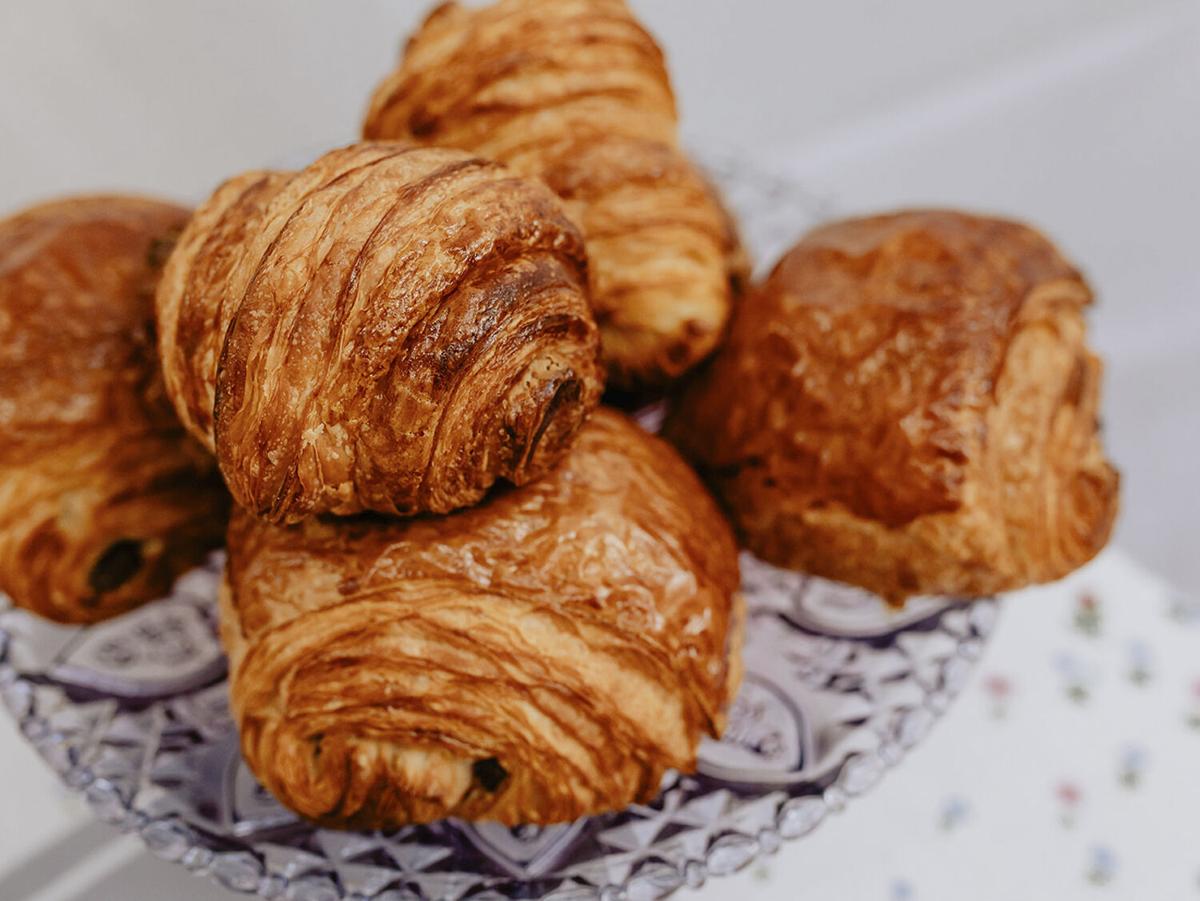 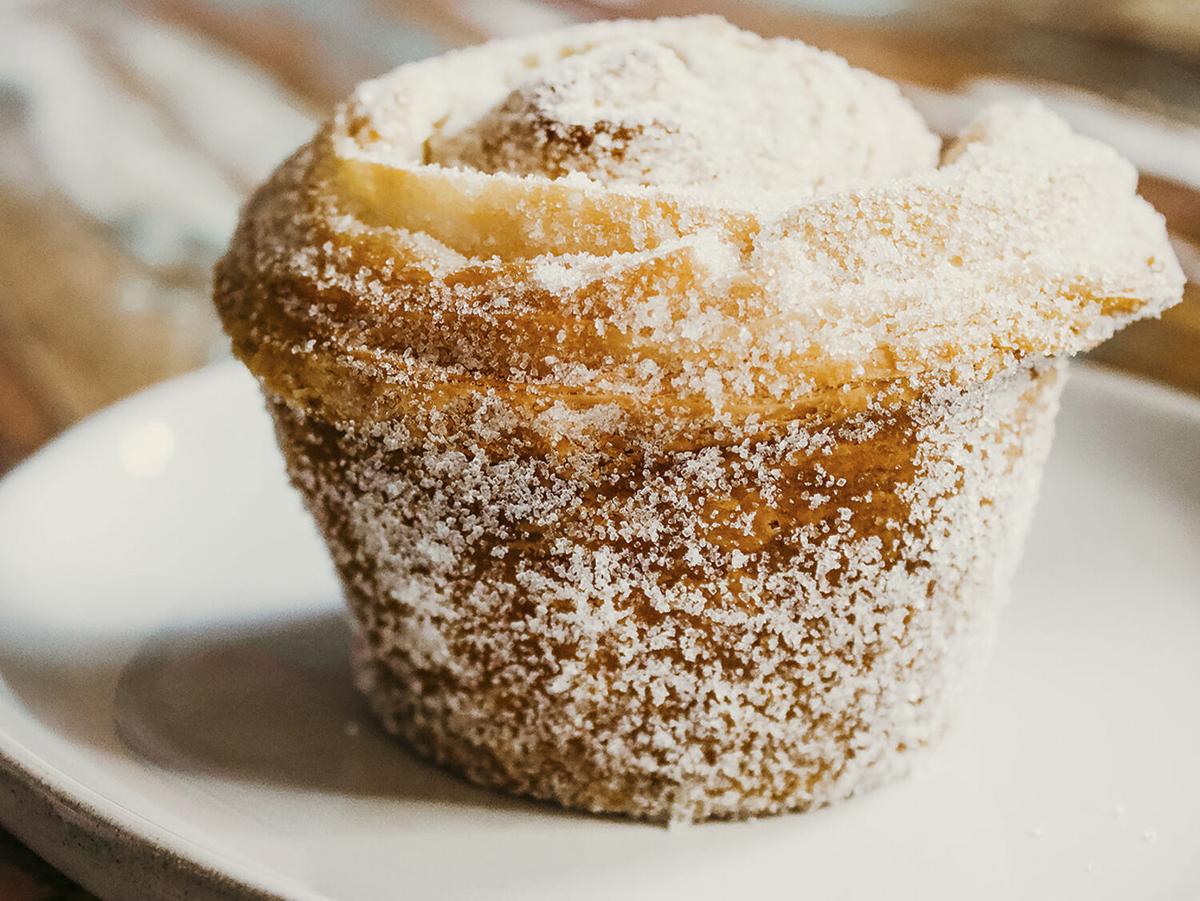 A house staple, the morning bun from The Bakery is a laminated, spiraled pastry sprinkled with cinnamon sugar.

A house staple, the morning bun from The Bakery is a laminated, spiraled pastry sprinkled with cinnamon sugar.

Since May, owners Jason Grubbs and Rebekah Irby have been selling out of croissants, sweet and savory galettes and a selection of sourdough and focaccia bread, among other seasonal treats, each week.

“The wonderful thing about croissants is you can make them into anything,” Irby says. “Right now, we do a seasonal savory veggie croissant, plus plain, chocolate, almond, chocolate-almond and cinnamon croissants.”

You can also make the flaky pastries anywhere, which is partly what drew the Culinary Institute of America alumni to mid-Missouri. After being laid off from chef gigs in southern California during the pandemic, they looked to Grubbs’ home state for their next opportunity. “Jason wanted to go back to his roots – and more space,” Irby says. “I’d never been to the Midwest, so I said, ‘Sure, why not change the scenery.’”

Once they were settled, the duo realized they could use their skills to add to the local pastry landscape with a collection of laminated pastries – a niche they found unsaturated in mid-Missouri. They’re some of the freshest pastries in town, too, as the baking magic happens just hours before the opening bell tolls at the market.

“We do a large overnight bake,” Irby says. “We make little things like fillings for almond croissants during the week, and then I start laminating and mixing on Friday.”

The dough proofs on Saturday, and the ovens are fired up that night. At approximately 5am, they have time for a moment’s rest, but they can only take a nap and then it’s off to the market.

For something seasonal, try the blueberry, peach and thyme galette. We also love the shop staple – and a West Coast favorite: the morning bun, a laminated, spiraled pastry sprinkled with cinnamon sugar. The menu is ever-changing, however, and Irby says they are working on adding more breads to the lineup. Right now, they offer traditional sourdough, whole wheat sourdough and a seeded buckwheat laden with pumpkin, sunflower, sesame and flax seeds. “Jason also makes a wonderful focaccia genovese topped with fleur de sel and fresh rosemary, and I make a brioche,” Irby says.

Beyond the market, the dream is to build a storefront featuring a little bit of everything they love, including baked goods and the elements that make them so delicious. “We can’t find certain ingredients that we love, which were everywhere in California, here,” Grubbs says. “So we’ve thought about having a small grocer up front with some pastas, salads, olive oils, wines – those sorts of things.”

Being the new kids in town, Grubbs and Irby get to stretch their legs and play with new recipes to see what resonates with their new audience. They respect what established restaurants such as Barred Owl Butcher & Table and Beet Box are doing, and they think they can bring something extra to the community.

The Bakery will remain a vendor at the Orr Street Farmers & Artisans Market through the end of the season. You can place a pre-order or schedule a delivery through The Bakery’s website, and Irby is also considering offering a weekly bread or croissant subscription box. “I thought that would be really fun, especially around the holidays,” she says.

Grubbs and Irby have already built relationships with mid-Missouri residents, and they attribute those connections to their rise and success thus far. “The best part of this business is hearing all the feedback from the community; that motivates us and pushes us to get a storefront and make it a really fun, community-based place where you can get a great croissant and other food,” Irby says.